TONI MORRISON: THE PIECES I AM 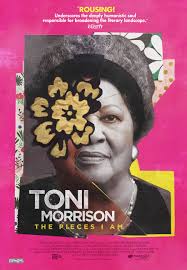 
Toni Morrison: The Pieces I Am is a 2019 documentary film, directed by Timothy Greenfiled-Sanders.  The film follows American novelist Toni Morrison who examines her life, her works and the powerful themes throughout her literary career. The film also features Oprah Winfrey, Russell Banks, Angela Davis, and Barack Obama.

« I AM NOT YOUR NEGRO
WHOSE STREETS »