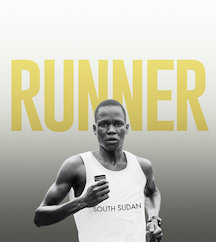 
The documentary “Runner” tells the story of Guor Maker’s triumphant journey from refugee to Olympian. The life story of athlete Guor Marial would be an incredible feature film even if it stopped before he arrived in the US as a young adult. Hailing from the war-torn region of Sudan, Marial had to fight for his life nearly every day due to the extreme violence happening around him at all times. The same violence that claimed the lives of 8 of his 9 siblings. But Marial’s story doesn’t end there, as his new life in the US led to the man becoming an elite athlete bringing hope to the people of his homeland and the opportunity to compete for Olympic Gold.