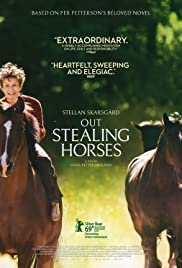 
November 1999: 67-year-old Trond (Stellan Skarsgård), lives in self-imposed isolation and looks forward to welcoming in the new millennium alone. As winter arrives he meets one of his few neighbors, Lars (Bjørn Floberg), and realizes he knew him back in the summer of 1948. 1948 — the year Trond turned 15. The summer Trond grew up. OUT STEALING HORSES is based on the bestselling novel by Norwegian author Per Petterson. Immediately following the film there will be a pre-recorded discussion between Stellan Skarsgård and filmmaker Hans Petter Moland. This conversation is exclusive to virtual cinema and in-theater engagements.

It was selected to compete for the Golden Bear at the 69th Berlin International Film Festival. At Berlin, the film won the Silver Bear for Outstanding Artistic Contribution.

« GORDON LIGHTFOOT: IF YOU COULD READ MY MIND
JAZZ ON A SUMMER’S DAY »